MOVIES UNDER the stars 2019

CDEM and Alliance française du Manitoba are launching a Movies Under the Stars program this summer for the first time, with a view to providing the province’s bilingual municipalities with an opportunity to hold outdoor movie nights in French.

“Outdoor movies are becoming increasingly popular in the tourism sector,” says Roselle Turenne, CDEM’s Tourism Advisor. “It’s a new industry trend. It’s being done a lot in Australia, the States and Europe. Even here, in Winnipeg, we have Movies in the Park nights at Assiniboine Park in the summer.” 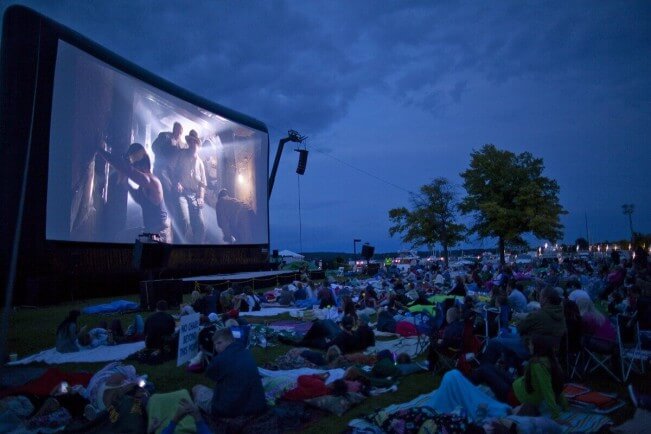 A bigger version of the inflatable screen. Ours measures 18ft X 15ft.

"So we thought we’d buy an inflatable movie screen and quality projection equipment so that we could share the outdoor movie experience with interested rural municipalities. We’re even hoping it’ll become a tourism vector and get people travelling to different communities for the occasion.”

CDEM purchased high quality equipment to bring movies to the communities, but one important element was missing: a public performance licence. That’s where Alliance française du Manitoba comes in.

Alan Nobili, the Director of Alliance française du Manitoba, explains. “We were considering the idea of showing films throughout Manitoba, particularly in rural areas, to revitalize the French language. We have access to several collections of French and Francophone films that we have permission to show but we didn’t have the equipment or the necessary contacts in the regions. CDEM has all that.” 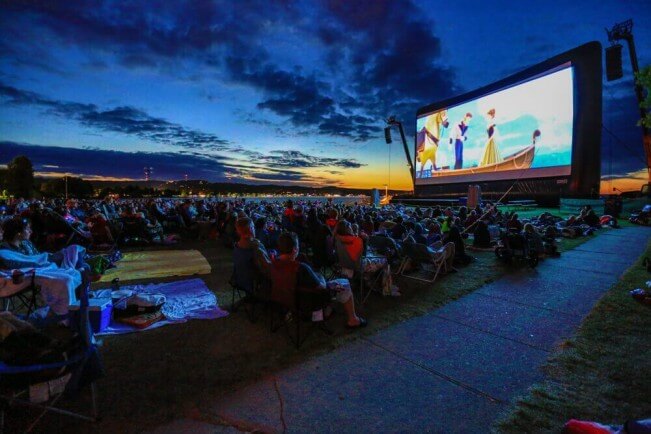 The equipment rental fee is $100. The price also includes the film and the projection license, the labour involved in setting up and taking down the screen, and a sound technician to monitor the equipment during the viewing.

“Everything’s looked after so that the rural communities have a great movie experience, without having to worry about anything,” says Turenne. “The only constraint is that we have to wait until it’s dark out, otherwise it’s hard to see the film on the screen. The weather has to cooperate, too. If the wind blows at more than 40 km/h or if it rains, it’s too dangerous for our equipment. We have to postpone.”

Alliance française du Manitoba was also responsible for developing a selection of feature films. For the first summer, the focus is on family films and cartoons. “We’ve included the best film from the 2019 Alliance française film fest, Le grand bain, and the one from 2018, Le sens de la fête. We’ve also got the film FM Youth by local director Stéphane Oystryk." 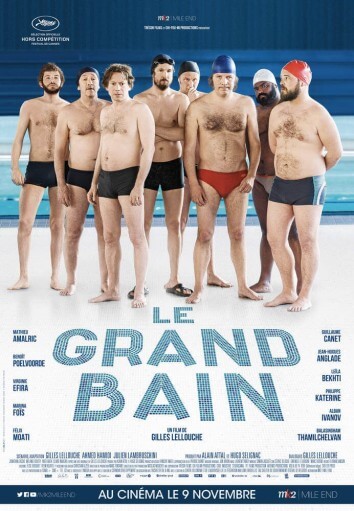 Roselle Turenne: “The communities get to choose the films they want. They can also request a film with an open license.”

The films will all be shown in French, with English subtitles. “We wanted to appeal to all families, including Anglophones,” says Nobili.

The first Movies Under the Stars is slated for June 22 in the St. Boniface Garden of Sculptures. Le grand bain will be featured.

Turenne also notes that the movies nights will be free for the public because “our license doesn’t allow us to charge admission. Communities will be able to charge for other things if they wish, like popcorn, but not for the film.”

Nobili is looking forward to working with CDEM in the rural communities. “It’s a good way for us to reach a new audience, one we’re less familiar with--rural Manitoba--and it’s also a great partnership opportunity for us.”

Turenne agrees: “Our partnership is like peanut butter and jelly. We complement each other extremely well!”

For more information or to book Movies Under The Stars for your community, call (204) 987-8062 or write to jtouchette@cdem.com.

This project has been made possible by the Government of Canada.